In our arts-based research, we explore ways in which arts practices can provide insight in complex global challenges and mechanisms, as well as the ethical framework that such practices call for. This research, empirical at its core, is a fertile breeding ground for our project development. Leading up to the pilot for The Innocence Lab in 2020, a pre-pilot workshop ‘Questioning Traumatic Heritage’ takes place in November, 2019 at H401 in Amsterdam.

In the workshop, dilemmas faced in the work field of trauma, memory and heritage are explored through participatory theatre and the methodology of Theatre of the Oppressed, developed by theatre practitioner, drama theorist and political activist Augusto Boal (1931 – 2009, Brasil).

The participants are a group of H401’s international guests, consisting of academic researchers working on memory, trauma and heritage, and non-academic professionals working in the fields of memory museums and sites of memory. Together, they explore traumatic heritage in the framework of the Horizon2020 funded project Spaces of Memory in Europe, Argentina and Colombia.

The workshop is facilitated by Giselle Vegter and Rabiaâ Benlahbib.

As an academic, at first it took me time to realise that the first exercises made the final exercise, and the power of using the body, possible.
I felt a sense of complicity and community, and a capacity of empathy and understanding.

Giselle Vegter (1976) studied Theatre Science at Utrecht University, Theatre Directing at Amsterdam University of the Arts and Dramatherapy at the Institut für Theatertherapie in Berlin. As a theatre maker her inspiration derives from (theatre) literature, performance art and social and therapeutic work. Her projects are a combination of community art, theatre and other disciplines.

Since 2004, Giselle has been working as a freelance theatre director in productions for young and adult audiences in collaboration with various festivals and theatre companies. In 2010, she founded Hotel Eldorado with the aim of connecting theatre and art to questions about identity, human rights and dignity.

Using her training in the methodology of Theatre of the Oppressed, she set up workshops for refugees and groups suffering from the consequences of displacement or exclusion, in order to support them in telling their stories and creating theatrical dialogues for an audience. Currently, Giselle works as teacher and tutor in the International Master Artist Educator at ArtEZ Institute in Arnhem.

Creative Court has previously collaborated with Giselle Vegter in the framework of Rooms of Humanity, an interactive theatre installation and public programme starting from the question: ‘Where does humanity slip into genocide?’. The project explored themes such as individual vs. collective responsibility, exclusion, propaganda and the dynamics between victim, perpetrator and bystander.


About the Theatre of the Oppressed

Augusto Boal’s methodology is rooted in Latin-America societies and came towards Europe in the ’80’s of the last century, where it was developed further. His playful method encourages our creativity, imagination and spontaneity while at the same time providing for research tools enabling us to take a closer look at conflicts, unspoken emotions and unconscious behaviour of humankind. Boals’ saying ‘Peace no Passivity’ has inspired many theatre-practitioners in the field of conflict, memory and transformational processes in many countries around the world. 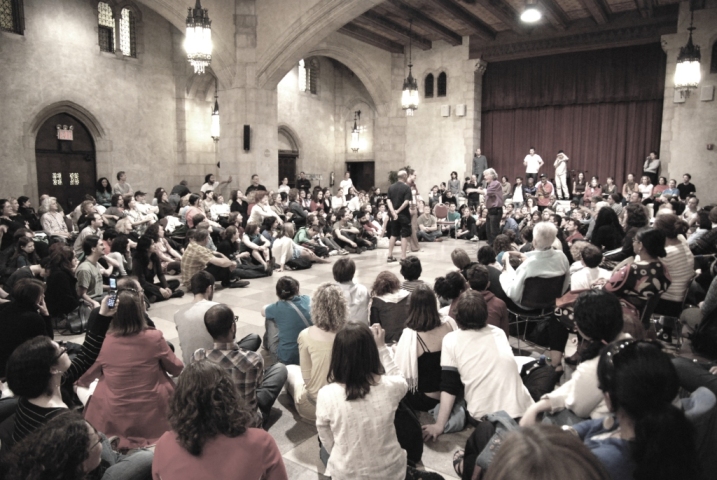